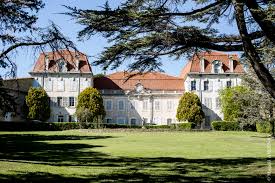 Château de Vaudieu, located in the heart of the Appellation Châteauneuf-du-pape, was built in 1767 by Jean-Jacques de Gérin, lieutenant of the Admiralty of Marseille.

Laurent Brechet, whose family has owned the estate for 3 generations is focused on respecting these terroirs and producing top wines.

The taste is mineral with a nice acidity which provides a lot of freshness to the wine. A long finale with saline notes.

Château Vaudieu 2015 (White) has been elected in 2016, BEST Chateauneuf du Pape white at the Saint Marc Competition which is organized every year by the federation of the wine makers in Chateauneuf du Pape. The winemakers themseleves judge the wines on a blind tasting.

Maurice DEYDIER descended from two generations of wine growers but towards the end of the 19th century he decided to establish a business in Châteauneuf du Pape as a cooper.

He worked with great talent at his craft for some years before facing the facts : he had a passion for the contents of his barrels and hence he too turned to wine making.

In the 1950's his son Jean became responsible for the business and quickly introduced a new dimension to the estate.He cleared, planted and exchanged vineyards and with the land contributed by his wife, Hélène Blanchard, the daughter of a wine producer, the estate quickly expanded to about fifteen hectares.

It is now Jean Francois Jean's grand son who run the winery.

This very spécial "cuvée" is made approximately every 4 years only when the vintage is exceptionnal. This 100% grenache is made with vines which are more than 100 years old. The wine was fermented in tratitional concrete tanks before being aged 12months in an old oak cask.

Wine Tasting  Notes: 2009 is considered as one of the best vintages of the last 10 years and the wine is now at its peak of maturity. This wine is a perfect expression of what old grenache vines are able to provide from beautiful "terroir".

The Wine is sold out even at the winery, so the wine is from their private collection exclusively for you as a members of my club.

Two longstanding and well known families of Chateauneuf du Pape, Jeune and Establet, who can trace their ancestors back to the 14th century, united their properties by a marriage between Christiane Establet and Pierre Elie Jeune in 1960's, and the Domaine du Grand Tinel was established in 1972.

The production of wine from 74 hectares (ha) (56 in Chateauneuf and 18 in Cotês du Rhone) are vinifiied in their renovated, now modern winery at Route de Bedarrides, in the outskirts of Chateauneuf du Pape. The vineyards are composed of rounded pebbles which soak up the heat of the sun during the day and restore it to the vines at night. The grapes are harvested only after reaching their maximum maturity which gives it a robustness and powerful aromas.

Wine Tasting notes : Alexis Establet is a special cuvee that's from 100% Grenache, all from the La Gardiole lieu-dit, and was raised mostly in larger oak tanks called tronconiques. It's a medium to full-bodied, lively, balanced wine that shows the more mid-weight style of the vintage, as well as classy notes of black cherries, currants, dried flowers and plenty of southern Rhone inspired spice and cedar. Drink it anytime over the coming 4-5 years.

This winery is a family run estate created in 1948 by an Italian migrant. The Domaine is now run by two brothers Thierry and Jean-Pierre.

This winery became in a few years one of the very top winery in Chateauneuf du Pape and is one of the rare wineries whichhas twice received the famous 100 Points by Robert Parker the famous Wine Expert.

They own 24 ha of very complex land with a lot of different soils types (River stones, Limestone, Red Clay, sand…)

The wine is traditionally made. The vines are between 35 and 75 years old. The grapes are handpicked and only 60% of the grapes are de-stemmed

The wine has aged 12 months in a big old cask, Small barrels and Concrete tanks before being blended.

Wine Tasting Notes: 2012 is a very good vintage and the wine tastes already good despite its young age (5 years old wine) and has still the capacity to age as the wine is well structured and balanced (tanins, acidity, alchol...).

Very complex nose of black fruits, taste of blackberries, blueberries, liquorice, provencal herbs and some toasted notes. If you wish to drink it now, I advice you to aerate it few hours before drinking.

The Wine is sold out even at the winery, so the wine is from their private collection exclusively for you as a members of my club.

Interview with Thierry Usseglio, Wine maker and president of the ODG (Organism Of Defense and Gestion) of the AOC Chateauneuf du Pape

What do you think characterizes AOC Chateauneuf du Pape wines ?

It is its specific "terroir" (climat and soils) which symbolise the Chateauneuf du Pape AOC. A unique and diversified terrain.

What are the characteristics of the Chateauneuf du Pape soils ?

The soils here is divided in four big catégories : the river stones which give the wine power and a full body. The sand which provide fineness and subtlety. The clay which provides well structured wine and finally Limestones which bring freshness to the wine.

What is the type of the 2012 vintage at Chateauneuf du Pape ?

The 2012 vintage is very well structured able to age and very generous in fruity aromas. It is a well balance vintage.

Could you please describe the 2012 Domaine Pierre Usseglio red ?

The color is very intense and purple. The Nose is very much on the black fruits, black berries, liquorice notes and provençal herbs. The wine has a nice structure of soft tanins. Long finish.

What is the aging potential of the Usseglio Pierre 2012 ? When the wine will be at the peak of maturity ?

The wine is already enjoyable especially after a few hours of aération. It will be at its best between 2022 and 2028. It is Worth to leaving one or two bottles in a cellar.

Any suggestion of food to pairing with this wine ?

As a Wine maker in Chateauneuf du Pape what makes you proud ?`

I'm very proud to be a wine maker in this beautiful and prestigious Wine Region because of my grand father: few years ago he decided to establish himself and his family in Chateauneuf du Pape.

Any message for our Americans's friends who enjoy the Chateauneuf du Pape wine ?

I hope our American's friends start to understand the characteristics and the subtilities of our climat (warm and dry) and the diversity and the complexity of our soils. I hope they are going to travel  a little bit to Provence through our wines.